Once upon a time when elves, giants and dragons walked the Earth, giants were collecting stones and building small towns on green hills. With time, people inhabited them and the giants fled into dense forests where, according to the legend, they are still hiding now.

When they built all the small towns in the Mirna River Valley, the giants built Hum from the leftover stones. Although the smallest town in the world, Hum is a centre of culture, history and gastronomy. ”The door does not close during the day, there is no night in this town.” is a message of welcome written on the Hum large copper door. Grab the handholds in the shape of ox horns and let yourselves in. Enter the wall-enclosed area – stone paved streets, small covered terraces leading to the house doors – a typical Istrian urban architecture at every step. Apart from being the smallest town in the world, Hum is also widely-known as the “Town of Biska” and the centre of Glagolism. Biska, a medicinal brandy with mistletoe is, after two thousand years, still made according to the Hum priest Josip Vidal’s recipe. In its honour, the Festival of Brandy is organised on the last Sunday of October, where brandy producers compete for the title of the best brandy.

When you reach Hum, then a visit to the hamlet called Kotli is also unavoidable. The fresh Mirna River waterfalls quietly dwell by the old watermills. Quiet and calm, cascading in falls, it has created cauldron-like ponds in rocks, after which this place was named. Left for time to take its toll, old mills and stone houses witness the times when more people lived here.

Legends and tales about the magic Istria are present still today – in dreamy small towns, Hum, Roč and Kotli – which wait for the dawn to come on small green hills, wrapped in a soft veil of mist. 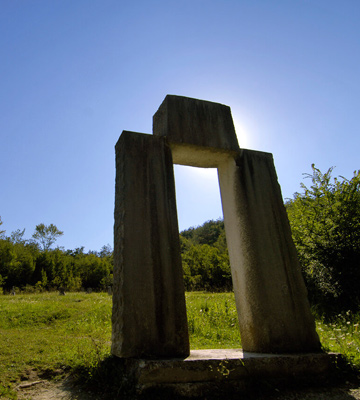 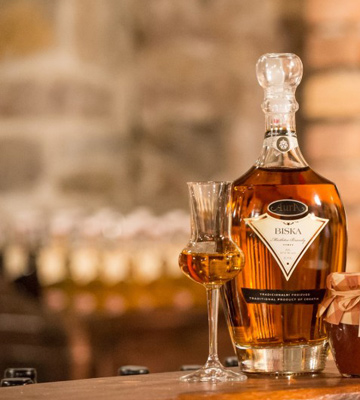 BISKA
A local yellow-brownish coloured brandy is made by soaking of the white mistletoe in home-made pomace. The town of biska, Hum, is famous for its original recipe, as old as two thousand years. In each season, a lunch or a dinner do not begin without a small glass of biska, a welcome drink, apéritif or a digestive. 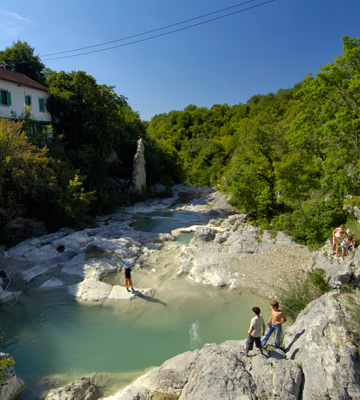 WATERFALL TRAIL
An attractive path, which, in its greater part, passes through the playful beds of the Mirna River and its tributaries, is a true treat for lovers of the untouched nature. The trail starts beyond Buzet and, after 14 km, 7 waterfalls, small lakes, rapids and a 5-hour walk, it ends at the starting point – Buzet.